For a world-leading mechanical engineering company like EREMA, convincing presentations at trade fairs and in sales are among the most important communication channels. Here you can find out how a planned cooperation for the K Messe 2019 between presono and EREMA has developed into a holistic concept for the entire sales department.

With sales of more than 200 million euros in the 2019/20 financial year and more than 600 employees in a total of six subsidiaries, EREMA Group is the global leader in plastics recycling. Founded 37 years ago, the machine manufacturer was already involved in the subject of recycling at a time when it was still little known. In the meantime, plastics recycling has become one of the most important topics of our time, which is also undergoing constant change due to digitalization. It is therefore more important than ever for the EREMA Group to present a strong corporate image at trade fairs and in sales.

However, the complex sales communication of the EREMA Group has reached its limits using the classic tools. And that's where presono came into play. In a joint discussion with Gerold Breuer, Head of Marketing & Corporate Development, we reviewed our previous cooperation and now reveal how EREMA has made the leap into the digital age with us in terms of presentation techniques and from now on convinces with strong company presentations in the field of sales.

Gerold Breuer and Martin Behrens presented the successful cooperation between EREMA and presono at the "Future of Marketing" event.

When theory and reality meet

The presentation and sales documents at EREMA were actually well structured, were always updated and stored on a file server, accessible to all sales staff. When changes were made, e-mails with current versions were sent out. In theory, this meant that the most up-to-date content was always available.

But shortly after Gerold Breuer started working at EREMA nine years ago, one thing caught his eye: In reality, the accessibility of current sales documents only worked in theory. Because the problem in practice was that there was no central storage. Each employee copied the contents to his computer individually, just as he needed them. With a total of seven companies now belonging to the EREMA group and complex sales documents comprising over 700 slides, it was therefore virtually impossible with the classic tools to ensure that every single sales employee had access to the latest content at all times. In addition, there were the usual daily hurdles, such as the overflowing e-mail inbox and the technical difficulties of downloading and opening such large files.

A uniform tool for the entire sales department

It was clear that for the wealth of information in EREMA Group's sales communication, PowerPoint was no longer the right tool to make the content accessible to a global sales network.

"When I got into conversation with Martin and Hannes from presono, they hit a nerve. I have rarely experienced a presentation that reflects exactly what my real needs are" explains Gerold Breuer.

The initial contact was followed by numerous discussions between presono and EREMA and soon it became clear that presono's central content management, presono's location and terminal independence and accessibility of content - online and offline - provided the solution to the challenges in EREMA's sales activities. The previous references of presono, for example the cooperation with Greiner AG, also convinced Gerold Breuer of presono.

Gerold Breuer reveals which three key features of presono he is particularly fond of:

Furthermore, EREMA uses our analysis tool to statistically evaluate content in order to optimize the sales strategy together with the employees. 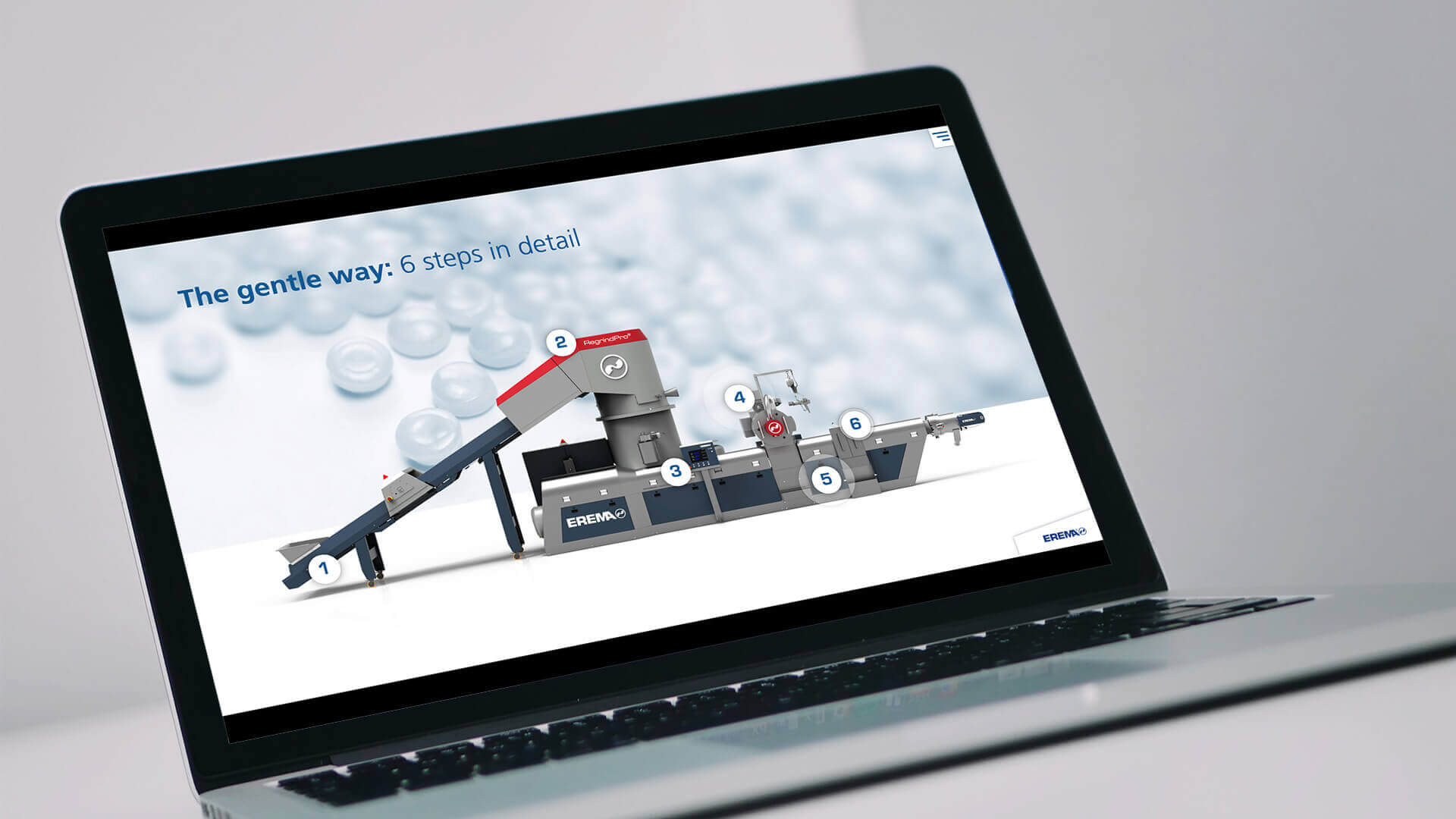 Key Features such as presono's web-based interface are very popular at EREMA.

A convincing appearance at the K Fair 2019

The initial aim of the cooperation between presono and EREMA was to create a convincing corporate image at the world's largest plastics trade fair with over 3000 exhibitors, the K Messe in October 2019 in Düsseldorf. For industrial companies like EREMA, trade fairs are one of the most important sales channels. They are a unique opportunity to present the company and its products to the relevant target groups and to establish new customer contacts. EREMA was therefore represented at the K Fair 2019 with three exhibition stands totalling approx. 1000 m2. presono was present on every single screen. Because the topic of digitization occupies the industry like no other - this should also be reflected visually in the company's appearance. "presono helped us to create this in a structured and accessible way and, depending on the Info-Point, to make the important information accessible" says Gerold Breuer. 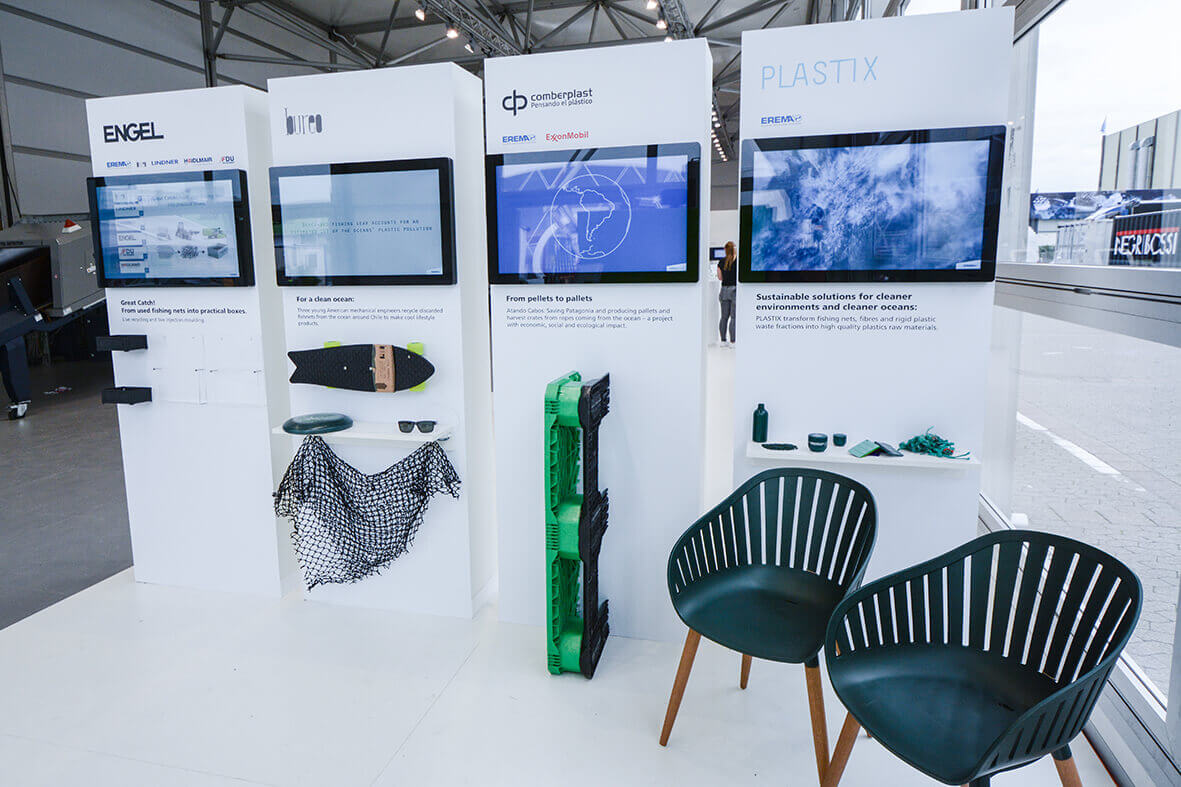 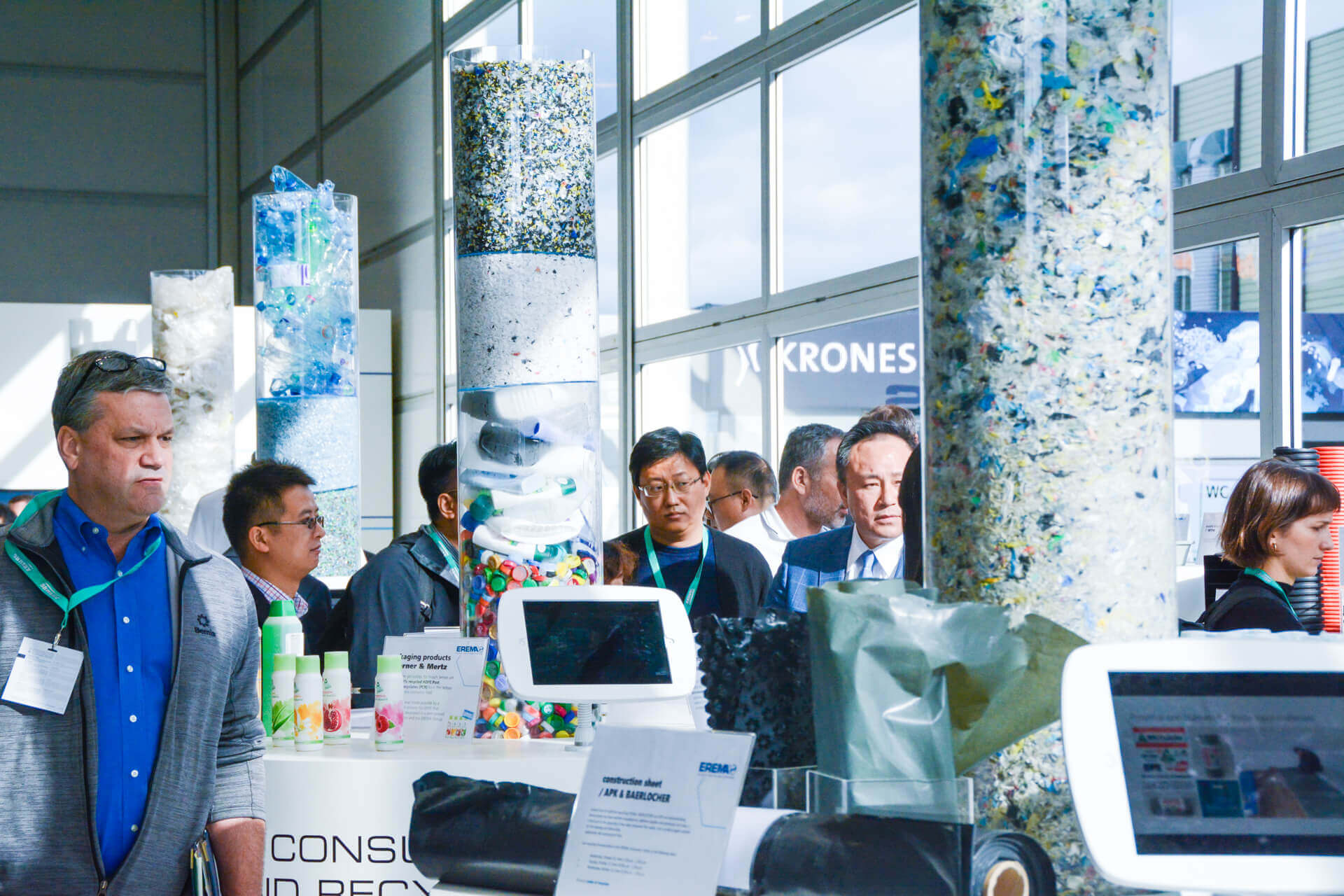 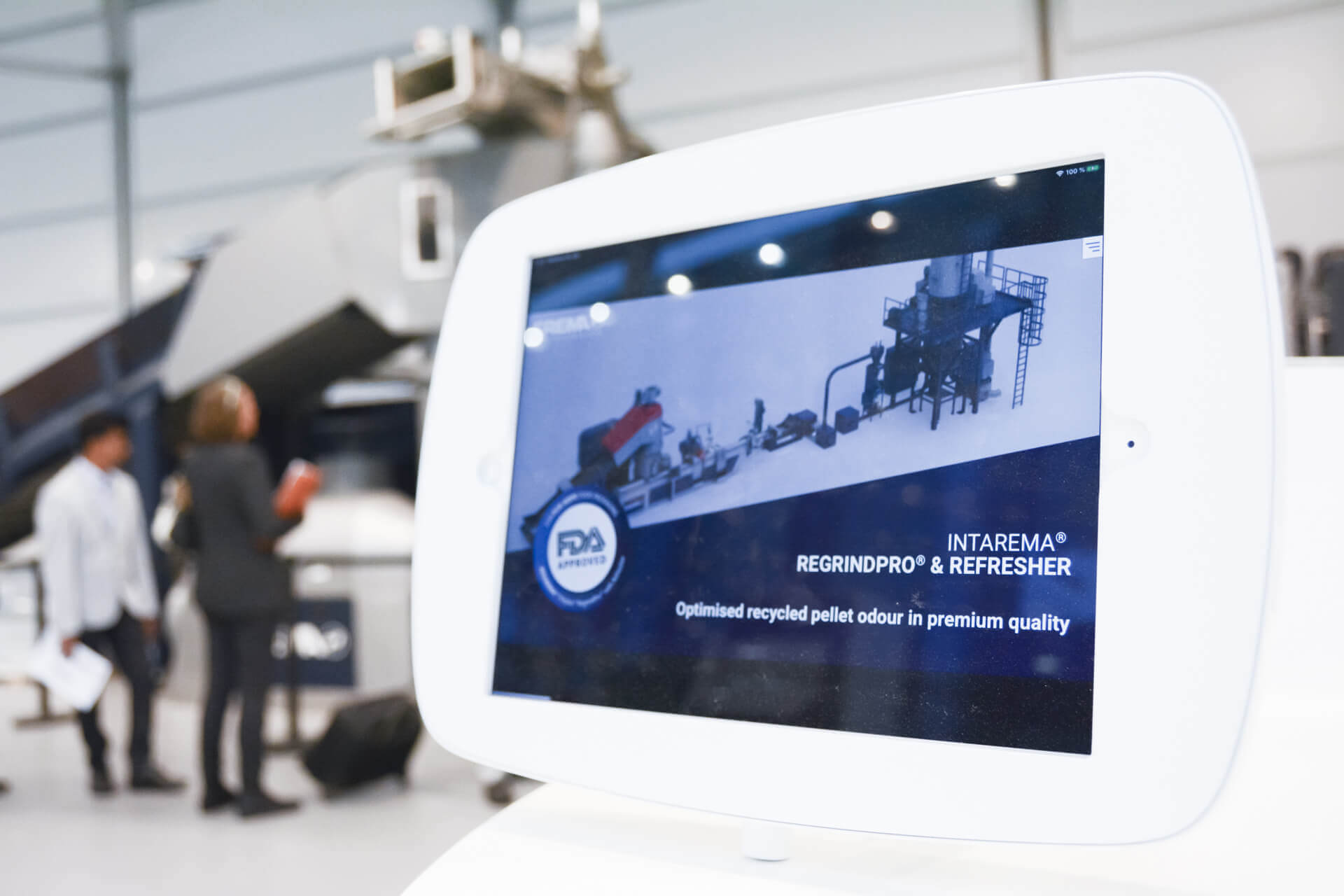 At the K show presono 2019 was used on every EREMA screen.

In order to make such a convincing trade fair presentation possible, intensive cooperation has taken place in several project phases since the start of the project in 2019. Gerold Breuer explains: "I would particularly like to emphasize the cooperation with the entire presono team. I always received competent answers quickly, nobody left me hanging in the air. Shortly before the K show, the employees were available around the clock to ensure that everything worked smoothly on all devices and that last changes could be incorporated. This creates trust for a long-term cooperation".

Next Step: presono as tool for the entire sales communication

But the trade fair appearance is not the end of the cooperation between EREMA and presono. In fact, Gerold Breuer and his team were so convinced by their commitment at the K trade fair that this only marks the beginning of a long-term sales strategy, which will be designed with presono. By 2022, presono is to become EREMA's sales support tool, through which all digital and physical content is intelligently, ergonomically combined and centrally available. 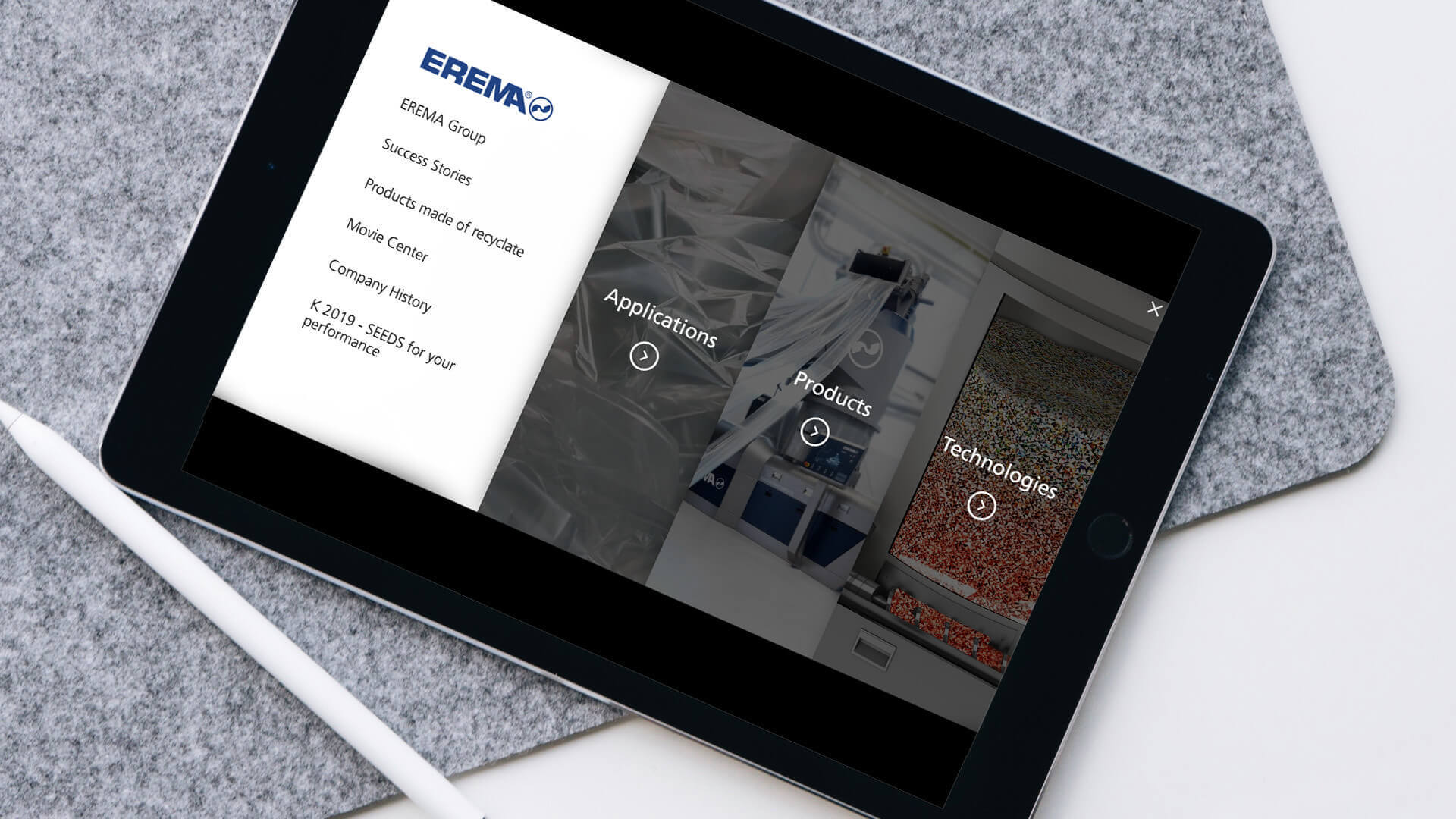 Common goal: By 2022 presono will be the all-encompassing sales tool of EREMA.

In order to find out whether this project would also be well received by sales, EREMA first conducted a survey with 25 sales employees. The consistently positive feedback set the next step in rolling out presono to the worldwide sales network, which consists of 50 agencies with two to five sales representatives each in over 60 countries. In the next step, training sessions with all sales employees ensured the efficient use of presono. These will be further intensified in the future and an internal employee was also entrusted with the presono project.

In the meantime, numerous sales documents are already available exclusively in presono's presentation solution. "I have used presono exclusively for all major presentations in the last two months. It has always worked perfectly and makes a very good impression", says Gerold Breuer.

And the managing director, DI Manfred Hackl, is also convinced. Gerold Breuer explains: "Recently, our Managing Director wrote to me that a small mistake had crept in during a presentation: A product name was incorrectly stated. I happened to be in presono's tool, went to the slide, changed it and wrote him back: It has already been changed and by the way it is already updated in our worldwide distribution network. Of course that is great. In the past, I would have written an e-mail to my colleague asking her to exchange the presentation on all devices, which would have been very time-consuming.

In the long term, EREMA will use presono as the only presentation tool in sales and at trade fairs. Gerold Breuer sums up: "I am enthusiastic about presono and its possibilities and I am convinced that it is exactly the tool we need for our growth strategy in sales for the EREMA Group".

We would like to thank Gerold Breuer for the interview and the successful cooperation, which we look forward to in the future.

PS: Even more information about the exciting advantages and the sophisticated basic principle of presono you can read HERE!

Stay up-to-date with our Newsletter

Yes, I would like to receive individual emails from presono with information & valuable tips about presenting.